Conduct of Hostilities: the Practice, the Law and the future 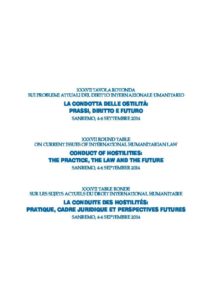 The 2014 Round Table on current issues of international humanitarian law, held in Sanremo from 4 to 6 September 2014, addressed the issue of “Conduct of Hostilities: the Practice, the Law and the future“.

The Round Table assessed the latest practice in the interpretation and application of the principles governing the conduct of hostilities and discussed how such principles should be interpreted and applied to the future evolution of warfare.
In this context, the principle of distinction between civilians and combatants was at the heart of the debate, The notion of military objects and the prohibition of indiscriminate
attacks were primarily discussed with particular reference to attacks in densely populated areas. That principle was not considered in isolation, but accompanied by an in-depth analysis of the principles which complement it, i.e. the principles of proportionality and precautions and their latest application challenges.