Weapons and the International Rule of Law 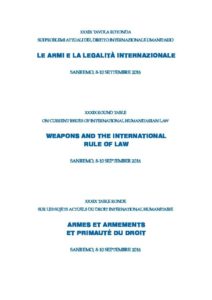 The 2016 Round Table on current issues of international humanitarian law, held in Sanremo from 8 to 10 September 2016, addressed the issue of “Weapons and the International Rule of Law“.

The purpose of this Round Table is to discuss and clarify current issues regarding the application of international law on weapons and other means of warfare, in light of current technological developments and abusive practices which characterise an increasingly worrying scenario of contemporary armed conflicts. Furthermore, another focus was the issue of the compliance with the States’ international obligations to conduct weapons reviews (as set forth in Article 36 of Additional Protocol I), an obligation which has become more and more relevant particularly in light of the increasing pace of evolving technologies. Conversely, the event reflected largely on best practices in applying IHL to new weapons and new means of warfare in order to respect the prohibition of the use of weapons likely to violate the principle of distinction or to cause superfluous injury or unnecessary suffering.