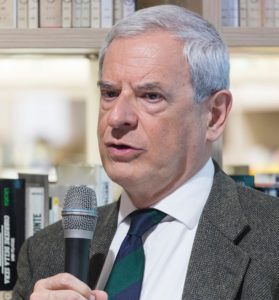 He is President of the School of Strategic Sciences (of the University of Torino and the Italian Army) and Director of the Master in “Cultural Property Protection in Crisis Response”.  He is also the Director of the Master in “International Humanitarian Law of Armed Conflicts” at the Istituto Superiore di Stato Maggiore Interforze (ISSMI) of the Centro Alti Studi per la Difesa (CASD) of the Defense General Staff in Rome, and Senior Associate Research Fellow at the Institute for International Political Studies (ISPI) in Milan.

From 2012 to 2015 he held the position of Secretary-General of the Italian Society of International Law (SIDI-ISIL), and he is also Member of the Societé Française pour le Droit International (SFDI).

In 2013 he was awarded the Gold Medal by the Italian Red Cross for the teaching and dissemination of international humanitarian law.

From 2012 to 2019 Prof. Greppi was Vice-President of the International Institute of Humanitarian Law in Sanremo, where he was also member of the Council from 2006 to 2012.

He was elected as President of the International Institute of Humanitarian Law, Sanremo, on September 7, 2019.