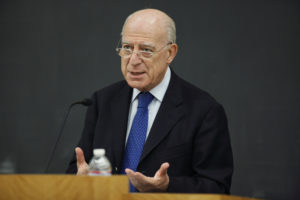 Prof. Pocar has more than 30 years of association with the United Nations. Since  2000 Appeal Judge of the International Criminal Tribunals for the former Yugoslavia (ICTY) and for Rwanda (ICTR), he has served as Vice-President and subsequently as President (2005-2008) of the ICTY, and has presided over many Yugoslavian and Rwandan cases, both at The Hague and Arusha.

He has served for sixteen years, including as Rapporteur and Chairman, in the UN Human Rights Committee under the International Covenant on Civil and Political Rights. Further, he served as Special Representative of the UN High Commissioner for Human Rights for visits to Chechnya and the Russian Federation during the first conflict in 1995-1996.

He has also been a Legal Adviser of the Italian delegation to the UN General Assembly and the Commission on Human Rights, and has chaired the informal working group that drafted, within the Commission on Human Rights, the Declaration on the rights of people belonging to national or ethnic, religious or linguistic minorities, adopted in 1992 by the General Assembly. He has also been for a decade the Italian Delegate to the UN Committee on the Peaceful Uses of Outer Space and its Legal Subcommittee, and is currently a member of the panel of arbitrators on outer space matters of the Permanent Court of Arbitration.

He is a member of the Bureau of the “Institut de Droit International” and of other scientific associations. He has lectured at the Hague Academy of International Law and has received many recognitions for his activity, including Doctorates honoris causa in Antwerp and Buenos Aires, and recently the appointment as “Cavaliere di Gran Croce” by the President of the Republic, the highest honor of the Italian Republic.